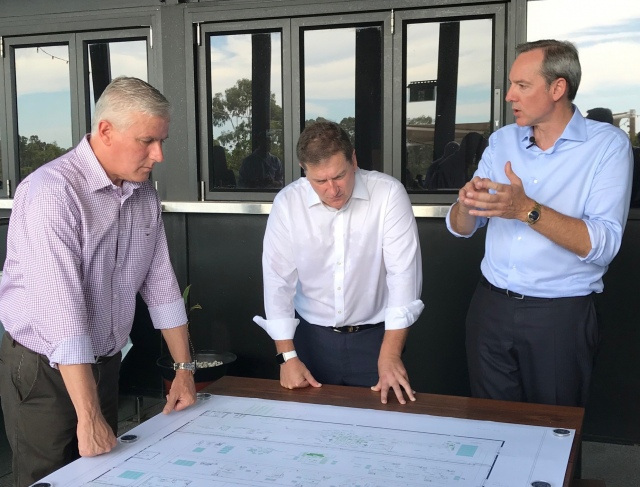 New industry for Maryborough focused on domestic and export markets

Rheinmetall NIOA Munitions [RNM] is pleased to announce it will commence construction of a $60 million state-of-the-art munitions forging facility in the regional Queensland city of Maryborough after receiving a Commonwealth commitment to support a major defence project that will create up to 100 new jobs in the Fraser Coast region.

The Federal Government confirmed earlier today it would commit $28.5 million towards the forging facility from its Regional Growth Fund following a thorough review of the RNM joint venture’s detailed proposal.

Werner Kraemer, CEO Rheinmetall Waffe Munition and Chairman of Rheinmetall NIOA Munitions, said that with funding now committed and the relevant approvals in place, implementation work would begin immediately on a facility that will manufacture the world's most complex and technologically advanced artillery shells for the domestic and export markets.

“Rheinmetall has identified Australia as a key strategic market for munitions and this Joint Venture is the cornerstone of Rheinmetall’s strategy to supply artillery shells globally,” Mr Kraemer said.

“We are committed to Australia and the Australian market. Through this commitment we want to create regional jobs and build a sovereign capability by employing locals and building a long term sustainable supply chain.”

Robert Nioa, Managing Director of NIOA and Director of RNM, said the facility would underpin important changes in the local community and the wider Australian defence community.

“The establishment of this new manufacturing facility here in Maryborough will not only help create local jobs but will also help ensure that future munitions supplied to the ADF will be made right here in Australia,” Mr Nioa said.

“We want to create a sustainable sovereign munitions manufacturing capability here in Australia and this backing by the Federal Government really underpins this significant investment and will ensure we deliver not only local benefits, but economy-wide benefits.”

Mr Nioa paid tribute to the Federal Member for Wide Bay Llew O’Brien MP for fighting to secure the project for the Fraser Coast region.

“Llew O’Brien has been a strong supporter of this project right from the start. Without his persistent efforts, I very much doubt we’d have achieved this outcome for Maryborough and the wider region,” Mr Nioa said.

“It’s pleasing to see the local Federal Member of parliament working with Ministers – the Deputy Prime Minister, the Defence Minister and Defence Industry Minister – to deliver great outcomes for their local community.”

Construction of the new facility is expected to commence in the second half of 2019 and be fully operational by 2022.