With the continual growth at NIOA we’d like to welcome the following professionals to our team:

Martin Watson – Program Manager: Sniper Ammunition
Martin Watson brings to NIOA over 35 years experience in Weapons and Munitions. He spent 12 years working on Australia's front-line fighter, the F/A-18A/B Hornet (Classic). Following discharge, he worked for BAE SYSTEMS Australia in Saudi Arabia on the Tornado fighter/bomber as a Weapons Load Instructor for 9 years before heading back home to take up the role of SME Mission Systems for the RAAFs E7 AEW&C Wedgetail program at Boeing Defence Australia. Following the completion of this project, Marty moved over to QinetiQ as a Senior Technical Officer/Consultant where he worked on various projects for the ADF on behalf of QinetiQ including an aging aircraft audit on the classic F/A-18A/B, Air 7000 Phase 2B - Maritime Patrol Aircraft Replacement Project and multiple Explosive Ordnance Design Assessments (EODA). As well as a secondment as an Engineering Officer at Air Combat and Electronic Attack System Programs Office (ACEASPO) for the F/A-18F Super Hornet and EA-18G Growler programs. More recently Marty has been the ILS Team Lead at Elbit Systems where he has managed the team responsible for Technical Data for the Army's Battle Management System (BMS).

Tony Pregnell – Integrated Quality Manager
Tony started his career in the RAAF as an Aircraft Maintenance Technician, and after 12 years he transitioned into civilian life with Boeing initially in aviation maintenance, then as a process specialist within the Quality function. He has worked for Insulect, BP (Bulwer Refinery) Logan City Council and L3 Harris in various Quality and Safety roles and is a successful and accomplished Quality and Safety Manager. Tony brings his extensive experience to the Compliance team by implementing quality and safety management systems with ISO9001 and AS/NZS4801 and managing them to maintain certification, whilst using innovative and engaging methods to bring departments onboard.

Adam Bylsma- Gunsmith
Adam has been an Olympic Clay Target shooter for Australia since he was 15 years old. In that time, he has won many international and domestic medals. Adam has always had a keen interest in firearms and Gunsmithing and has completed some work with Beretta Australia in Melbourne.

Stephen John - Project Manager: Minor Acquisitions & DPD
Stephen John brings to NIOA over twenty-five years’ experience in Project Management, Operations, Training and Integrated Logistics Support gained within the Finance and Defence industries. Stephen’s previous role at EM Solutions as the Program Director was to establish and manage the companies defence projects in both Acquisition and Through Life Support/sustainment contracts for the USN, ADF and CASG. He led the Tri-Band Wideband SATCOM system projects as part of SEA1654, SEA1180 and the ANZAC Class FFHs for the RAN. Whilst working for SMA, Stephen was responsible for the IIS component of the training and ILS for Battle Management System for the LAND 75/125 Project. Stephen has obtained a number of tertiary qualifications and accreditations, including a Master of Project Management and a Master of Business Administration. In addition to this, he also holds IPMA Level B: Certified Senior Project Manager certification. Stephen also served as a Defence member in the Australian Army Reserve for over twenty-five years as an Infantry Soldier and as a Royal Australian Engineer Officer.

Charmaine Fitzsimmons – Solicitor
Charmaine is a lawyer and is admitted to the Supreme Court of Queensland, with legal experience in workplace relations & safety, banking & finance, transport as well as native title. She attended the University of Queensland where she studied a dual degree in a Bachelor of Laws and Business Management. With her expansive knowledge she is a great asset to the Legal team.

Jodi Hutchins-Executive Assistant to General Manager, Weapons and Munitions
Jodi has over 20 years’ experience in the government and private sector working across different areas of administration including event management, office management and as an executive assistant. Her experience as an Executive Assistant in Government will be of great value to NIOA as well our GM of Weapons and Munitions.

Slavomir Janusik – Project Manager: Minor Acquisitions & DPD
Slavomir Jankusik has joined NIOA in the role of LAND 159 Project Manager Minor Acquisitions & DPD. Slavomir has recently concluded a fourteen-year career in the ADF as an Infantry Sergeant. Slavomir's previous role in the ADF was that of a Company Training Warrant Officer where he was responsible for the administration and training of over one hundred twenty soldiers, depot management and management of company WHS issues. Prior to this he was posted to the School of Infantry Sniper Cell where he was responsible for course management, training development and leading minor research projects.

David Stagg – Junior Engineer
Earlier this year David completed his studies in Electronic/Communications Engineering and Computer Science at RMIT University. During the last year of his studies he was given the opportunity to put his learnings into practice, working full time at the Holden proving ground in Lang Lang as a Transmission Calibration Engineering Intern. Prior to this David taught first year computer science classes at RMIT.

Sam Brennan – Engineer
Sam Brennan joins NIOA as a Weapons/EO Engineer in the Melbourne office after 6 years at Rheinmetall MAN Military Vehicles. Sam had a lead role in the verification and validation of multiple vehicle mission systems, and also worked as a systems engineer throughout the acquisition phase of Land 121 Phase 3B. He completed the Bachelor of Aerospace Engineering at RMIT and spent a year at Airbus in Germany prior to graduating.

Photos available at time of print. 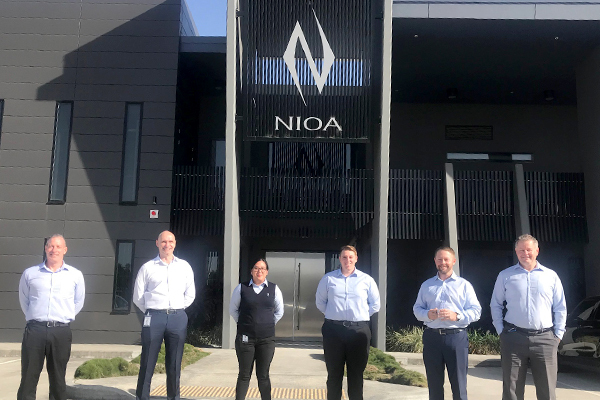