Leading Australian-owned defence prime NIOA is set to break ground on an $11m expansion of its Brisbane base, creating 40 jobs at the peak of construction.

The Eagle Farm facility – home to NIOA’s corporate headquarters, warehouse and distribution centre – will accommodate a 90 FTE increase in project managers, engineering, administration and operational personnel within the new building.

The company has entered a significant growth phase with a $130m capital investment in domestic munitions and explosives manufacturing including a $60m artillery shell forging plant in Maryborough with joint-venture partner Rheinmetall Waffe Munitions GmbH, as well a co-tenancy at the Australian-government owned munitions plant at Benalla in Victoria.

It recently secured Stage 1 of Tranche 1 of the LAND 159 program to modernise the Army’s weapons systems and in 2018 was awarded the $100m LAND17 – 1C.2 future artillery ammunition contract.

The company has additional offices in Melbourne, Canberra and the United States and is well positioned to become a global exporter in the weapons and munitions sector.

NIOA CEO Robert Nioa said the new building would add a 1445sqm of space, adjacent and connected to the existing 8000sqm state-of-the-art facility in the Brisbane Airport precinct which opened in 2014.

‘’It’s going to be a great building and will provide a wonderful working environment for our team,’’ Mr Nioa said. ‘’NIOA is committed to projects that strengthen and grow Australia’s sovereign industrial capability.

‘’This expansion will offer us the ability to innovate and grow long into the future, so we can pass on even greater service to all of our customers who have supported us for decades, as well as keeping skills, knowledge and jobs here in Australia.’’

BESIX Watpac general manager for Queensland and the Northern Territory, Drew Brockhurst said his team was pleased to be awarded such a unique project for a great Queensland company.

“BESIX Watpac is excited to partner with NIOA to deliver this innovative superior quality project within a sensitive secure operational environment,” he said. 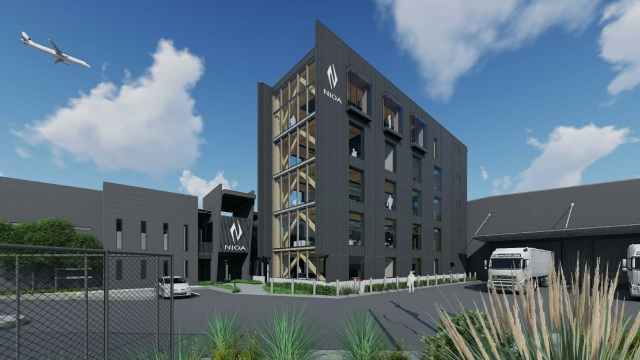