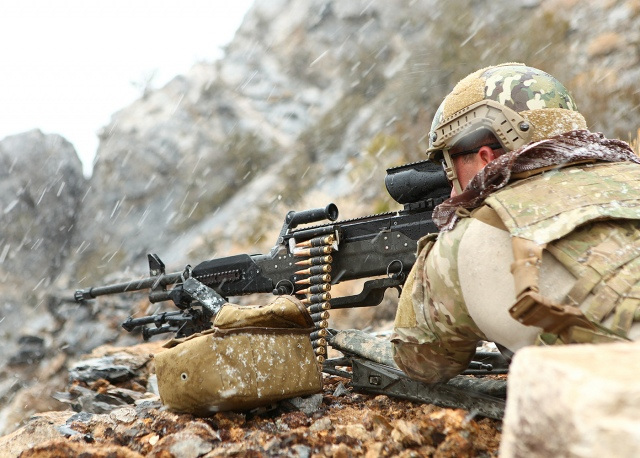 NIOA will be displaying the GD-OTS LWMMG (Light Weight Medium Machine Gun) at the upcoming Land Forces Expo in Adelaide this September 2018, and representatives from GD-OTS will be in attendance.

NIOA first demonstrated the GD-OTS LWMMG at their Land Forces Conference Live Fire event back in 2012, validating the superior ballistics of the .338 Norma Magnum round and it’s potential to provide an enhanced direct fire support capability.

Improvement in optics has extended the range of the modern battlespace creating a new requirement for a round such as the .338NM, that can deliver increased accuracy and lethality at those extended ranges. Additionally, the proliferation of Level III body armour, which cannot be defeated by 7.62mm NATO rounds at extended range, further strengthens the necessity for an extended range direct fire support solution.

The LWMMG offers a distinct advantage in both extended and close-in fighting, eliminating the gap between 7.62mm and .50 calibre weapons. It utilises the highly efficient .338 Norma Magnum cartridge to offer unmatched accuracy and lethality while extending the battlespace out to an impressive 1700 meters. Capable of defeating Level III body armour and incapacitating soft-skinned vehicles at 1000m, the LWMMG’s .338NM round delivers in excess of 1900ft/lb of energy to the target, more than four times that of the 7.62mm NATO round.

The patented technology of the Short Recoil Impulse Averaging mechanism substantially reduces recoil and improves target retention during automatic fire. With an operational weight of just 10kg and featuring a fully collapsible stock, the LWMMG offers superior mobility and portability in both mounted and dismounted operations