We’d like to welcome the following professionals to our team:

John joins NIOA as Inventory Controller – Weapons & Munitions, bringing with him several years of experience in Defence Industries. He joins us from Cutting Edges Equipment Parts, where he worked as the Warehouse Manager supporting the day to day logistical needs. Previous to that, he spent 8 years in the Defence Force posted to 6th Battalion Royal Australian Regiment as a Rifleman, then later as an Operator Supply (Logistics). John left the Defence Force to join Harris Defence Australia as an Inventory Specialist providing logistical support to various areas.

Tim joins NIOA in the role of Contract and Administration Support – Law Enforcement. He was previously the Asset and Project Manager for Seasons Aged Care. Prior to his position with Season’s, Tim worked within the Defence Sector, most recently undertaking Contract Performance Management for the ARH Tiger and MRH-90 Taipan helicopter platforms for Army Aviation. Tim also has many years’ experience within Defence employed in various roles which pertained to new construction quality assurance, asset maintenance and data management.

Alex joined NIOA in the role of LAND 159 Project Manager Sighting Systems / HUMS. Alex’s background includes a thirteen-year career in the ADF as an Infantry Officer that concluded as a Company Commander in the 6th Battalion here in Brisbane. Alex has completed a Master’s Degree in Capability Management and subsequent roles as the Project Manager responsible for LAND 125 Phases 3B and 3C, he also provided initial input to LAND 159 during the capability definition phase. Most recently Alex has managed three business units at the Citadel Group Limited in Labour Hire and Professional Services.

As the new Contracts Manager in Benalla, Andrew has experience with Defence manufacturing commencing as an Army Apprentice in Electronics, providing a comprehensive understanding of Defence technology, weapons systems and platforms, and their support requirements. Later graduating from Duntroon, Andrew commanded a Technical Support Troop and was the Electrical and Mechanical Engineering Operations Officer for the Air Defence Regiment, including managing the maintenance support of missile systems. Other roles included Training Development Officer for Electronic trades, and Second in Command of maintenance and logistics operations in Western Australia. Utilising these skills and experience he subsequently took up a Project Manager role with ADI Limited – Weapons and Engineering Division to manage the stakeholder engagement and contract management with both internal and external clients.

David joins NIOA as Deputy Director of the Lethality Program, based in Melbourne. David has lived and work in New Zealand, the U.K and Australia working across the manufacturing, IT and Defence sectors. David spent time at QinetiQ in its Melbourne office as a Senior Principal Consultant and Team Lead for its Victoria Advisory stream. While there, he worked on a number of projects including supporting the Force Structure Review, Land 2110 (in both the Tender development and Tender evaluation), Land 19-7A, and Land 907-2/Land 8160-1. Post QinetiQ David was the Operations manager for a small Defence consulting firm. His most recent two engagements included project management on Land 3025-1, and completing a scoping study into a supply chain risk assessment for LAND Domain. Amongst his qualifications, David holds a Bachelor and Post-Graduate degree in Defence and Strategic Studies, Prince 2 & Diploma of Project Management.

Luke Lagos started in the freight forwarding industry in 2009 as a trainee with Kuehne + Nagel and completed a 2-year traineeship gaining a Certificate III in Transport and Logistics Warehousing and Storage. He has handled Import Air, Export Air, Export Sea and specialised in Import Sea / Break Bulk shipments including cartage and 3pl distribution. After leaving Kuehne + Nagel in 2015 Luke took a position at Associated Customs and Forwarding Services as Assistant Branch Manager. Luke worked at ACF for 4 years and was responsible for overseeing all aspects of the branch to deliver a high standard of freight forwarding solutions to the companies customers.

Lachlan has commenced in the role as Junior Engineer, based in Brisbane. Lachlan has completed Mechanical Engineering at the Sunshine Coast University, prior to this he spent a year in 2015 in the Army Gap Year program as a driver specialist. He has also completed a work experience program at Praesidium Global in 2018 on their Unmanned Ground Vehicle (UGV) program, as well working for Airbag Man in both graduate and undergraduate engineering role/s.

Joel comes to NIOA with over 20 years of service in the Army. Joining the Army in 2000, Joel was a career Infantry Officer who served in Command, Staff and Operational appointments at all ranks, at home and abroad, with 15 of those in Special Operations Command. Since 2014, the majority of Joel’s appointments have been capability focused, working at unit and headquarters levels within Special Operations Modernisation. He was involved in the development and refinement of SO requirements to bespoke work packages, as well as inputs to wider LAND and JOINT Projects with SO equities. Most recently he has been heavily focused on Special Operations Force Design, Disruptive Technologies Assessments, Force Structure Plan 2019, Innovation, Robotics and Autonomous Systems and other capstone Joint Concepts.

Rhiain joins NIOA with over 10 years’ experience in Administration in multiple different businesses ranging from Sporting, Construction and promotional merchandise. Through this experience Rhiain is able to bring a vast range of skills to assist the COO and Operations Team.

Peter comes from a Small Arms Product Management and BD background, most recently within Thales Vehicles and Tactical Systems. Peter brings with him extremely diverse experience generated from near 20 years’ experience in small arms technical and business roles within Defence and industry.

Daniel (Dan) joins NIOA as the HSE Specialist. After leaving the QLD Police Service Dan has held HSE positions in a variety of industries for both Government and Private sectors including logistics, coal seam gas, offshore immigration, water utilities and aviation. Dan's most recent position was with Brisbane Airport Corporation as Emergency Planning Manager and is credited with the delivery of the airports major biennial exercise to commission Brisbane's New Runway. 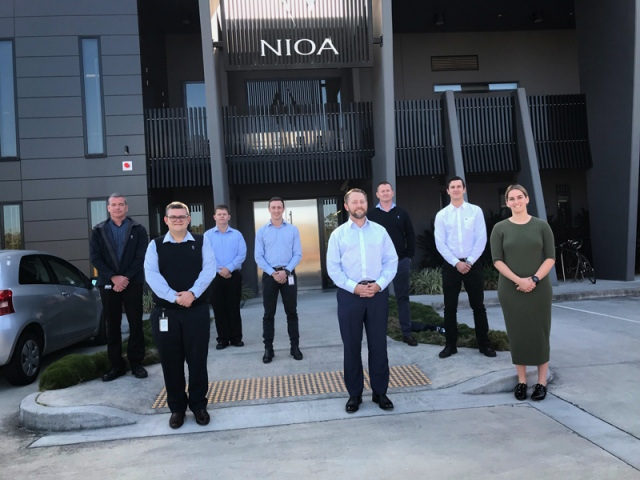